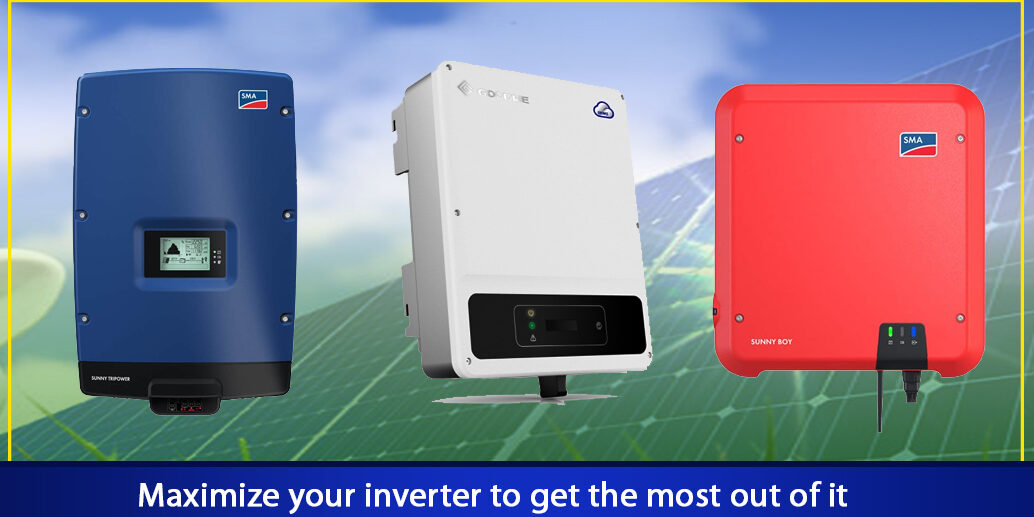 Maximize your inverter to get the most out of it

The efficiency of the inverter drives the effectiveness of a solar panel system because inverters convert the Direct Current (DC) into Alternating Current (AC). This leads many to wonder what effect over-sizing or under-sizing an inverter will have on overall system efficiency.
A solar system’s inverter functions optimally within a predetermined operational ‘window’ (usually laid out in the inverter’s specifications). As the power input from the system’s solar panels goes up and down, the inverter’s ability to efficiently convert it from DC electricity to AC electricity differs. As long as the input from the panels falls within the range of the window, the inverter can be considered to be operating optimally.

Oversizing exposes the inverter to the following:

The Effect of Oversizing on Inverter Life

Designers, developers, and system owners should view the effects of oversizing in inverter life and Mean-Time-Between Failure (MTBF) through practical lenses. Large Array-to-Inverter ratios cause the inverter to work harder for extended hours, not only in the spring-time peaking hours but also during the hotter summer months. In addition, most commercial three-phase inverters operate less efficiently when operating above the maximum PowerPoint voltage, resulting in greater internal heat rejection. Common sense tells us that this can cause some of the temperature-sensitive components to ageing faster compared to a lightly loaded scenario.
The good news is that inverters have thermal management architectures to control internal temperatures to protect the inverter during a prolonged period of full power operations. These measures also act to help preserve the life of temperature-sensitive components. Inverters sense temperatures of critical components and have programmed setpoints that trigger increased blower fan speed and power limiting as a means of regulating the internal temperature. In addition, inverters have critical temperature limits that, once reached, result in inverter shut down. Inverters also include one or more temperature switches as backup safety mechanisms in the event of an uncontrolled temperature increase due to failures in the inverter’s thermal management control systems. System designers should understand the inverter’s maximum ambient operating temperature for full rated power and consider other factors that affect the inverter’s operating temperature and cooling ability, including inverter shading, elevation, and mounting location (indoor/outdoor, ventilated/conditioned). Designers are encouraged to use good engineering judgment and attempt to promote optimal cooling of the inverter to ensure the longest life of the equipment. System owners should perform regularly scheduled maintenance of any air intake filters and cooling system.

Under-sizing your inverter will mean that the maximum power output of your system (in kilowatts – kW) will be dictated by the size of your inverter. Regardless of the output of the solar panels, the power output will be cut-off (‘clipped’) by the inverter so that it does not exceed the inverter’s rated capacity (e.g. 3kW, 5kW, etc).
Your installer may suggest an undersized inverter if they determine that the amount of incident solar irradiation (sunlight) on your panels will be lower than expected – because of your location & climate, the orientation of your panels, or other factors.
Inverter under-sizing sometimes referred to as ‘overclocking’ – has actually become a common and widely accepted practice in Australia – even endorsed by inverter manufacturer SMA, one of the largest and most respected names in the industry. Although the maximum power output of a solar system will be ‘clipped’ back to the inverter’s output through overclocking, there can also be gains in the overall amount of energy (kilowatt-hours – kWh) generated and slightly more energy produced early in the morning and late afternoon.
Solar inverter under-sizing (or solar panel array oversizing) has become common practice in Australia and is generally preferential to inverter over-sizing. If an inverter is under-sized, this should happen within certain parameters – which accredited solar installers will be familiar with.
If you want your solar PV system to produce as much energy as possible, then you can use a technique. Increasing the array-to-inverter ratio, using a technique is known as ‘maximizing’ can help to ensure you’re getting the most out of your system.
Maximizing is when you install a solar array that has the ability to generate more electricity than your inverter’s maximum output capacity.

How does maximizing work?

At first, it is important to understand how solar panels work throughout a day and furthermore over a year’s time span. It is very raring that you will accomplish 3kW output from a 3kW solar array. This is because, in Australia, solar panels generally produce around 80% of their nominal output capacity in the middle of a summer day, and even less during a good day in other seasons. This will reduce throughout the years as the panels degrade.
Along with seasonal differences that occur as a result of fewer daylight hours, your solar array’s output also depends on factors like shade or dust on your panels, humidity levels, daily temperatures, the pitch and orientation of your roof.
Next, we need to look at how solar panels are actually rated. The system for determining a solar panel’s maximum output is measured using ‘Standard Test Conditions’. This includes directing 1000 watts per square meter of light at a perfectly perpendicular panel, in a temperature-controlled room ensuring a cell temperature of 25 degrees Celsius and free of losses from things like dust, cables, and any degradation. As you can imagine, this is probably not going to happen in a residential setup unless you put some extremely expensive provisions in place. So, for this reason, the panels don’t produce their nominal output capacity in any real-world scenario.
Good quality inverters can accept more DC power than the maximum capacity of AC they are specified to output. Fronius will actually warrant up to double the DC capacity to AC maximum output, provided it’s done correctly. When maximized, they will expand the voltage and decrease the current of the DC electricity traveling from the solar array. This prevents the output from exceeding the maximum AC level the inverter was designed to handle. The inverter will allow slightly more power coming from the panels than its maximum AC output, which allows for conversion losses within the inverter.

Why is maximizing beneficial?

Maximizing your inverter is particularly beneficial, especially if you have panels on different roof orientations. It is also handy if you have access to Time-Of-Use (TOU) tariffs, as you extend the number of hours your system is producing electricity to include periods when electricity is in high demand (such as later in the afternoon). Financial benefits are big advantages for new installs, as the price tag for panels continues to reduce and installation costs are offset by the increased productivity that comes with a larger solar array.

How can you maximize your inverter?

To maximizing your inverter, you need to contact a reputable solar company to inspect your specific needs. Since every situation is different, so you need to seek advice from a qualified and experienced installer. The experienced installer can crunch the numbers and design a solar PV system that takes your details into account.
Here we have discussed this article about maximizing your inverter to get the most out of it. If you have any queries, then get in touch with us.
Categories: solar, Solar SystemBy adminJuly 23, 2021Leave a comment

Top 5 reasons to have solar panels at home or business
August 27, 2021

Why maintenance of your solar power system is important?
July 23, 2021